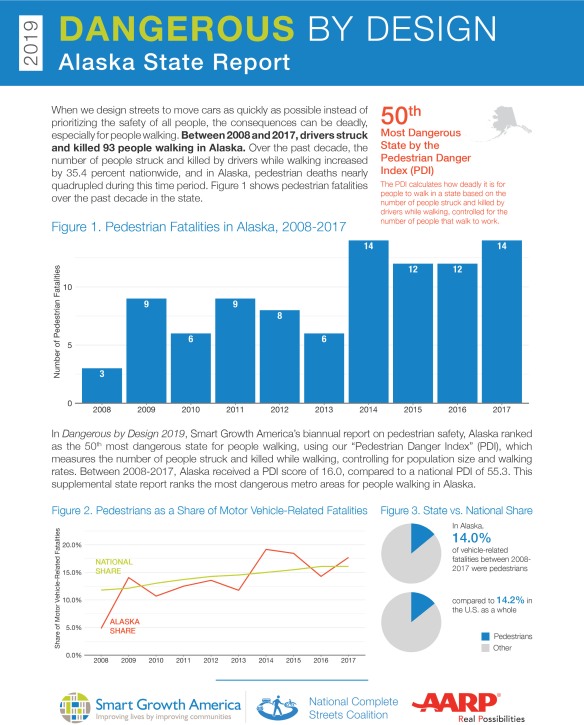 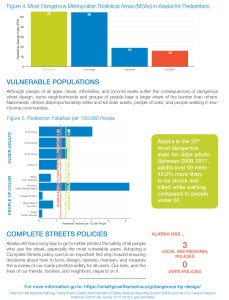 ANCHORAGE, AK— The rate of pedestrian deaths in Alaska has quadrupled in the last decade, according to Dangerous by Design 2019. The new report from Smart Growth America highlights the risk of being struck by a car and killed while walking in Alaska. The report ranks Alaska 50th in the nation in terms of the number of pedestrian fatalities overall, but the 25th most dangerous state for older adults.

Between 2008 and 2017, adults age 50-older were 45 percent more likely to be struck and killed while walking compared to people younger than 50.

From 2017 to 2035 the state’s 65-older population will grow 68 percent, Alaska’s state demographer projects in the August 2018 Alaska Economic Trends.

“Alaska has traditionally had one of the youngest populations in the nation, but we’ve been the fastest aging state for years, too. Our community design needs to shift to reflect this, with short- and long-term fixes to increase safety for all ages,” said Terry Snyder, AARP Alaska volunteer state president. “Changes like longer crossing times help everyone who moves a little slower, like young children, frail elders, or fit young adults who on crutches.”

Nationwide, the number of people struck and killed while walking increased 35 percent in the past decade, according to the Dangerous by Design report released in February 2019. The last two years tracked, 2016 and 2017, had the highest number of pedestrian fatalities since 1990. Older adults, people of color and people walking in low-income areas are disproportionately likely to be struck and killed while walking.

Anchorage’s pedestrian death rate is the highest in the state, and matches the national average.

“The good news is that Anchorage’s and Fairbanks’ Metropolitan Planning Organizations have adopted Complete Streets policies, which look at the needs of all street users, including walkers and bicyclists as well as drivers,” said Snyder. “This is an important first step towards improving pedestrian safety.”

The Alaska state report is linked below, as is the full Dangerous By Design 2019 report. Learn more about AARP’s work to promote complete streets and livable communities at www.aarp.org/livable-communities/getting-around/.