How does Alaska rank when it comes to cycling compared to the rest of the United States? According to the 2018 state progress reports released last week by the League of American Bicyclists for its Bicycle Friendly States program, Alaska ranks 35th, which is an improvement of one spot since the last official ranking in 2017 when Alaska was 36th.

While each of the 50 state progress reports shows a ranking in the upper right corner, the League of American Bicyclists did not make an official ranking in 2018.

“We did not update the ranking this year,” League of American Bicyclists policy director Ken McLeod said. “This year we only did an analysis of federal data and outreach to state advocates and agencies for comments. The ranking is based on a more comprehensive survey process, which we intend to do in 2019.” 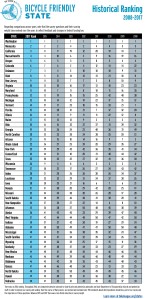 “Since creating the Bicycle Friendly State Program in 2008, the League of American Bicyclists has ranked each state based on the actions taken to make bicycling better. Of special focus has been outcomes and activities by state legislatures and their departments of transportation,” the League’s website said. “For 2018, the League used federal data on bicycling to highlight the evolution of biking-related inputs and outcomes in every state during the last decade. The Progress Reports provide graphs of state ridership, safety and spending, including comparisons to regional and national averages for each indicator.”

The progress reports provide additional information based on federal, state, and local reports for each state’s ridership, safety, and spending on bicycle infrastructure. It also looks at whether or not a state has made policy changes in five areas — adopting a Complete Streets policy, adopting a safe passing law (at least three feet), updating the statewide bicycle plan within the last 10 years, creating a bicycle safety emphasis area, and using 2 percent or more of federal funds for bike/pedestrian projects in the past five years. Of the five policy areas, Alaska only answered yes to the statewide bike plan (the Alaska Bicycle and Pedestrian Master Plan is being updated this year for the first time since 1994 and is in final draft status, so this is a gain from 2017) and having a bicycle safety emphasis area (our only yes in 2017). 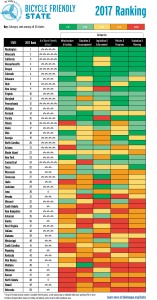 “The Bicycle Friendly State℠ program was launched in 2008 in order to better understand state efforts related to bicycling and provide a comparative framework that allows states to easily identify areas of improvement,” the League’s website said. “Through our ranking, we hope that states and the public can easily understand the relative strengths and weaknesses of each state’s efforts related to bicycling.”

Alaska’s progress report noted we rank seventh overall in bike commuting at 1.0 percent (a slight decrease since the rankings started in 2008), We also rank over the past 10 years as one of the most safe (top 10) for bike commuters as far as fatalities, and we also showed one of the largest decreases in the amount of Federal Highway Authority funding being used for bike/pedestrian projects (although that total did go up in recent years). In addition, the progress report noted the update of the Alaska Bicycle and Pedestrian Master Plan and an effort by biking and walking advocates to create a statewide advocacy group called Bike/Walk Alaska.

While the 2018 progress reports don’t constitute an official ranking, here is how the states rank based on the numbers in the upper right corners of every progress report: